Recently, I received an email from a concerned parent about how her daughter’s math assessment was graded. With the email, I received a copy of the graded assessment. The student is in the 8th grade taking an Algebra class.

I was mixed about whether to write about someone else’s grading methods / policies / standards. If you are a teacher, you will likely know what I mean. Often times there are in-class, verbal instructions that are given, that do not find their way onto paper. Part of the reason for this is that sometimes there are meaningful clarifications that have to be made because some students may have misinterpreted or misunderstood (or not understood at all) the instructions given. Another reason is that rather than write an \(n\)-page, legally-worded document explaining the instructions in an airtight manner, it is simpler to give “common sense” verbal instructions. Additionally, even if there are no changes to the instructions given on the exam, there is still an understood context. For example, textbooks often have the instruction $$\mbox{Simplify the expression}$$

For example, on the last Intermediate Algebra exam I gave, I had the instruction “Find all real solutions for \(x\) to the equations below. If no solutions exist, state why.” And one of the problems under this set of instructions was \(y^{4} – 2y^{2} + 1 = 0\).

Some students said, “There is no solution because there is no \(x\).”, while other students “understood” the question to mean “Solve for the only variable …” (or maybe they didn’t even read the instructions). Regardless, during the exam, I announced that that particular question was null and void as it was badly worded with respect to the instructions given. But if a third party, not privy to the in-class nuance, were to see my exam, the reaction could be, “What the heck kind of question is this?”.

Next, on the matter of the actual task of grading, different teachers have different styles. On one extreme, some provide feedback on the assessment, while on the other extreme some just give points (or minus points). And again, the in-class nuances do not show up on paper.

For example, when I grade an assessment, I will typically scribble something out, squiggly underline an erroneous or confusing part, and then just write how many points the student received on that question. If a third party were to look at the manner of grading, then an easy criticism would be, “How is a student supposed to learn what they did wrong if this is the type of feedback they receive?”. Unfortunately, what happens in class is not accounted for in the criticism. I, for example, go over the assessment with the class when I hand back the assessment. As I do the assessment review, I explain where points were lost, what mistakes students made, what the correct answer(s) is (are), etc. I tend to not write corrections on the assessment since, ultimately, I want students to be able to correct the assessment for themselves and I typically offer such opportunities. Also, by working out the assessment in front of the class, it gives me and the students opportunities to discuss (as a class) some recurring / class-wide mistakes. It’s a way of letting students know that more than one person made the same mistake.

Anyway, the larger point here is that what you are about read is based solely on the assessment that was given to me in paper form. I do not know what has transpired in class, let alone the expectations that the teacher has set forth. Please keep that in mind before going forth with pitchforks (at me or the unnamed teacher).

I have blacked out some identifiable information like the student’s name, the date, and the type of assessment. I provide my commentary after these two images. The first is page 1, the second is page 2. Page 2 was on the back so I blacked out the parts of page 1 that seeped through. 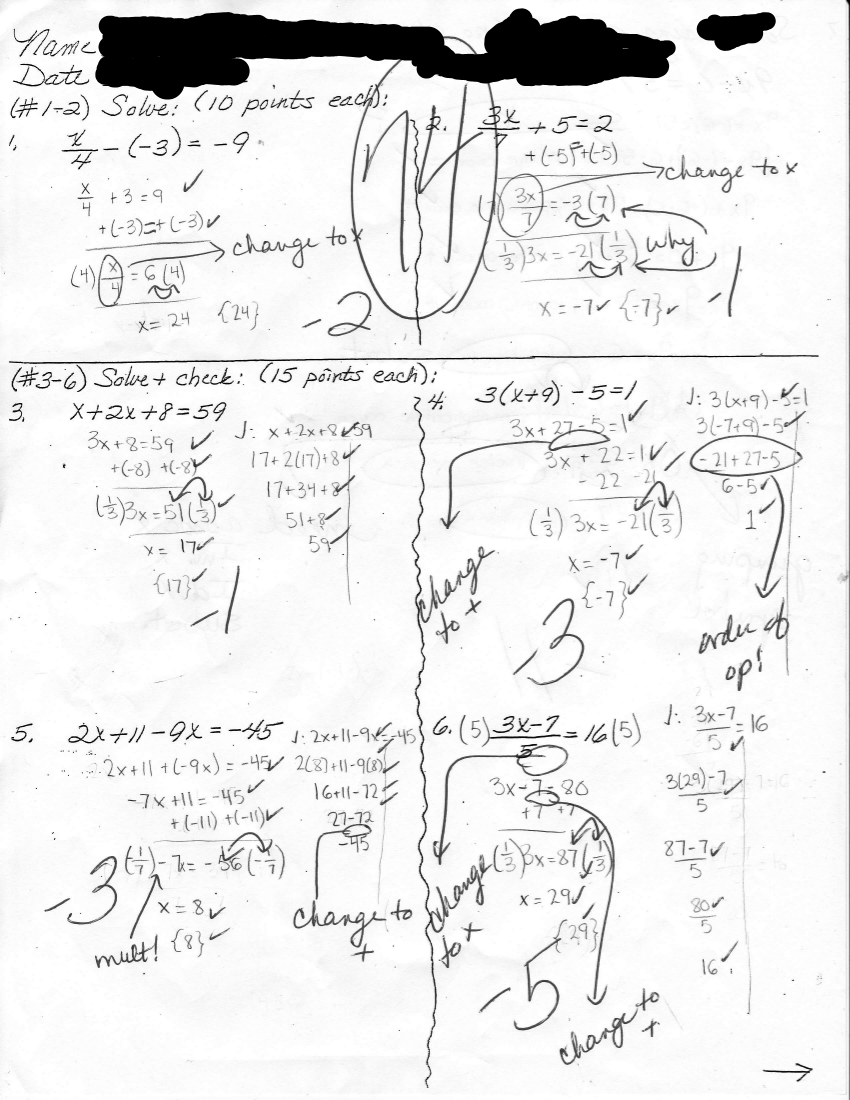 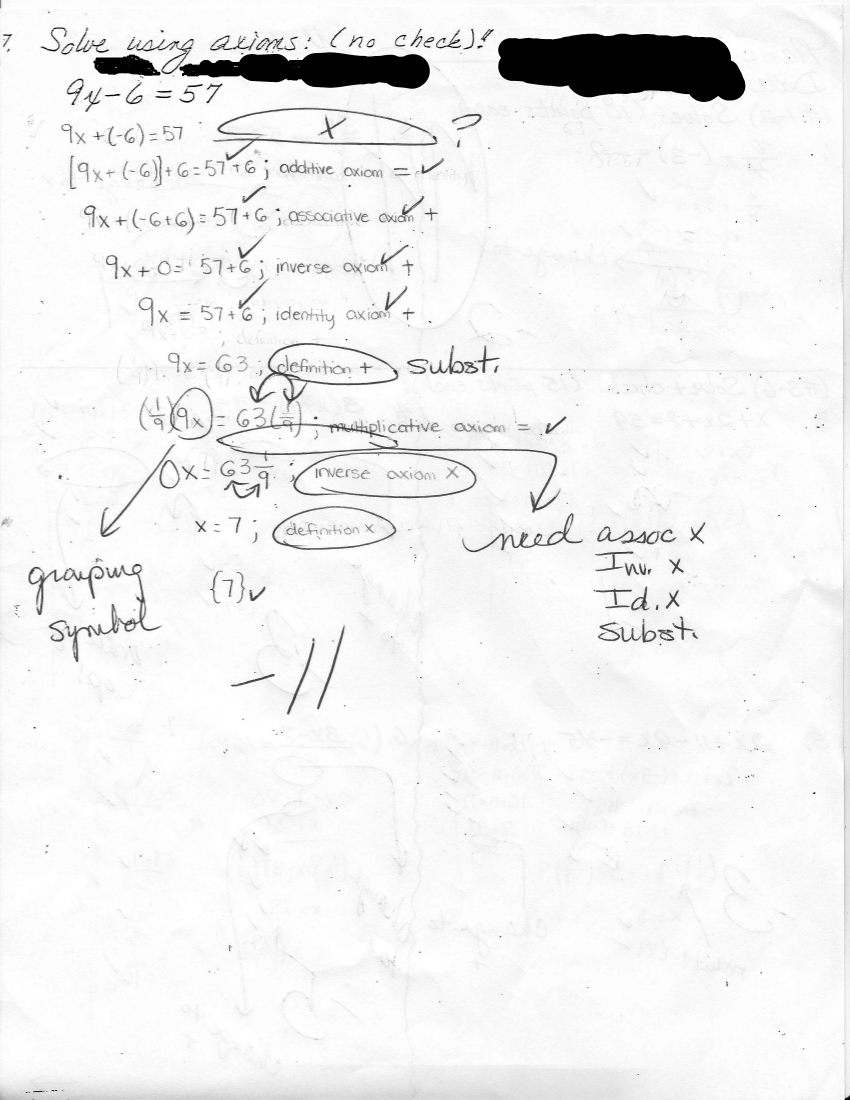 Generally speaking, I thought the student did a fantastic job on this assessment. The work was clean, the penmanship legible, and the mathematics sound. I have to say that I was a bit stunned by how the work was graded. There are some good parts about the grading and some not-so-good parts.

I like that the teacher checked every step and didn’t just gloss over the work. I also like the detailed feedback that was given — though I don’t agree with much of the feedback. Regardless, there is a consistency in the feedback and an acute awareness of what the expectations were.

I thought that the lost points here were unnecessary.

I have similar commentary on problem #2.

I do like that the teacher filled in the “\(=\)” for when the student handled the additive constant on the left-hand side.

Problem #3: What?! Lost a point for left- vs right-multiplication?! Or something else?

Problem #5: Again, the same nitpicking of the student’s work. Although, I do like the fact that the teacher called out the missing parentheses around \(-7x\). I may have nicked the student for a point on that, but in all likelihood, I probably would have just called it out and shown the visual difference between \(\frac{-1}{7}-7x\) and \(\frac{-1}{7}(-7x)\).

A defense I can think of in favor of the grading is that maybe all the axioms were written on the board or a reference sheet was available explaining each axiom; maybe the teacher had written on the board that all multiplication has to be done in the same way (which is still not a correct way of teaching this).

But I’m really puzzled as to what is going on here! This type of grading (and hence possibly teaching?) of math is entirely too rigid. The teacher’s perspective here is unknown to me, but it seems that the student’s perspective is lost on the teacher. This is an 8th grader! Taking Algebra! She’s using semicolons to denote end of line! That’s a programmer in the making! (Kudos to the teacher for teaching them about programmatic line breaks, but shame if that were part of the prescription for working through the math.) We don’t have to treat students with kid gloves forever, but this just seems like militant grading.

There’s only one other thing I can think of that would make someone grade like this: it is having to explicitly ensure that students know explicit standards. This is where we get into tricky territory. One of my fears is that “grading / assessing via standards” will eventually lead to “checklist-based grading” like this. I understand that at the grade school level there are a myriad of standards that students have to be tested towards. But this seems excessive either on the side of the standards requirements or the teacher (or both). How did other students do on this?

This is the stuff of math misery. If I were asked to grade this assessment, it would land in the neighborhood of 99-100. I may have docked a point for the lack of parentheses on problem #5. This student clearly knows what is going on and there is no need for this level of inflexibility in the grading.

On a related, but unrelated note, look at how all the answers cleanly worked out to integers. At least there were fractions in the original equation! And to reprimand myself immediately for that, this is one assessment of probably several (to come), so it is entirely likely that there will exist problems with fractions as answers. I just hope those assessments won’t be graded in the way this one was.

Readers, what are your thoughts? Is this excessive? Par for the course? Somewhere in between? Please leave comments below. Other educators chiming in will be greatly beneficial! Remember, all we have is this one assessment.

7 thoughts on “How Would You Grade This?”