Almost a month ago, @JZagorski1 asked this:

@shahlock Hi Manan, would love to know your thoughts on best ways or program/resources to improve math comp. fluency at el ed level?

And now, I’ve finally gotten time to sit down and write some broad thoughts on the matter. Now, I understand that this is a huge topic and one single blog post won’t do it complete justice, but, it is better than replying on Twitter.

There are two main questions in Josh’s tweet: “Best ways” and “Best programs/resources” to improve math computational fluency at the elementary education level. I’ll answer these in a general manner to set up the rest of this article.

Every teacher, good or bad, who thinks they teach Math well, will feel that their methods are ‘best’. A subset of these teachers probably have effective methods of teaching the content and, like any other professional in any other industry, are constantly refining their craft. As such, whatever we deem best, we can likely improve on it. This is part of the teacher’s dilemma.

One thing to remember, at least for this article, is that there is effective teaching (call this Set \(A\)) and then there is effective learning (Set \(B\)). While there is an overlap between these two (\(I = A\ \cap B\)), they also have their separate regions (\(T = A\ \cap \sim B\) and \(L = B\ \cap \sim A\)). Effective teaching could be characterized as clear exposition and organization of content (region \(T\)) as well as creating a respectful environment for learning (region \(I\)). Effective learning could be characterized as high retention of content (and meaning of content) in terms of vocabulary, mechanics, and theory, the ability to pose and answer meaningful questions related to the content (region \(L\)), and the ability to teach the material effectively (region \(I\)).

In this way, we have a feedback loop in (Math) education. Good teaching begets good learning. And good learning begets good teaching (both region \(I\)). But the system is somewhat lossy since good teaching doesn’t guarantee good learning and vice versa. Learning isn’t a brain dump from the teacher to the student. The student still has to do something (region \(L\)). Similarly teaching isn’t simply a scripted set of reactions to student confusion. The teacher does have to actively think about best ways to convey the content (region \(T\))— a point of this article.

I have generally maintained that the more the teacher knows the less he/she will have to rely on third party content to assist with teaching. I see a lot of “Top \(N\) apps for <math subject topic>” articles and am always perplexed as to why a teacher would build lessons around these products. For example, I don’t need a web or mobile app to teach, say, Arithmetic on my behalf and by and large, nor do students need those to learn Arithmetic. I can teach Arithmetic plenty well and in a myriad of ways, if need be. And students can learn Arithmetic without app gimmickry (euphemism: “interactive learning”). I suppose a goal would be to get students to learn despite themselves — but if that is our main goal, we have other problems.

From a content organization standpoint, third-party resources can be very useful. And much to the dismay of some, textbooks do a fine dandy job of laying out a thoughtful sequence of topics. Once again, the well-versed instructor will be able to modify or rearrange the sequence of topics to his / her preference. Strong content organization, be it in the form of a textbook, pre-set curriculum, etc. can help the less-versed instructor become better-versed. For example, I could teach a standard sequence in Mathematical Analysis, but I really would need a course textbook not just for the organization, but for anchor points for exposition. On the flip side, I absolutely do not need a textbook to teach Algebra, though I use one just to see topic headings. I also tend to rearrange content order when teaching Algebra, but wouldn’t do so with Analysis until I had taught it for a few years.

So what do we need to build mathematical fluency? And how do we do it?

Fluency is tough to define. It’s one of those, “you’ll know it when you see it” kind of things. I’ll argue that mathematical (or any subject) fluency (computational or otherwise) can be broken down into three main categories:

An unfortunate side effect of making such categories is that it leads to an artificial order and a relative disjointedness in teaching the content. For example, I have seen this happen in too many math classes (click for a larger version of the image): 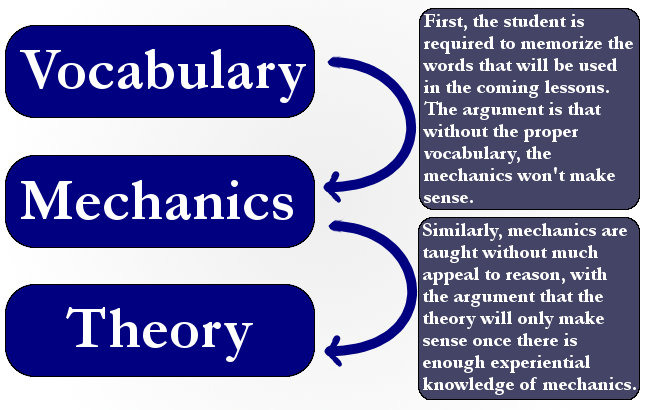 Generally, I find this approach to not be effective in building intuition. The approach I prefer follows a model somewhat like this (click for a larger version of the image): 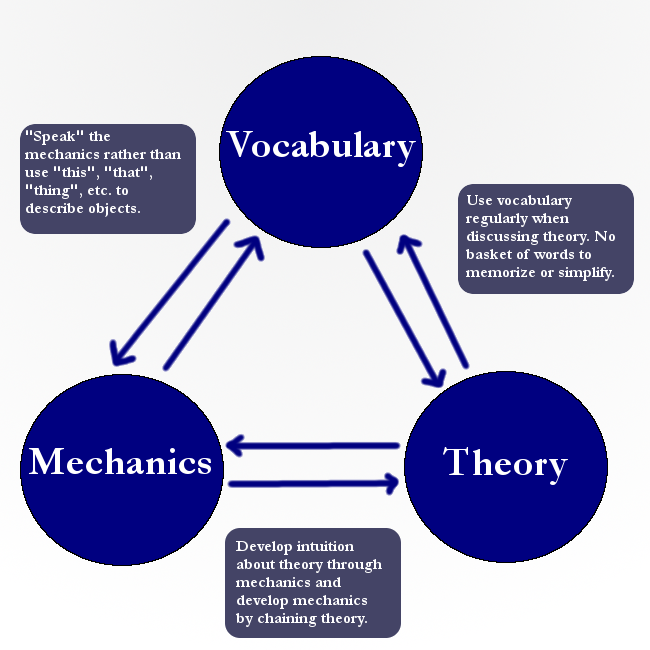 The idea is fairly simple. If the goal is fluency, then we must have immersion. For example, when introducing elements of graph theory to a group of second graders, I just started using “vertex” and “edge” and constantly pointed to them as I drew on the board. And wouldn’t you know it, in a few minutes, they started using the same vocabulary. There’s no need to simplify “vertex” and “edge” to “dot” and “line”. Students can handle it!

Instructors ought to use vocabulary regularly and steadily get students to move away from “grunting”. When a person doesn’t know how to refer to something, the placeholder ends up being “thing” or “it” or some such equivalent. The separation here is that while the internal model for what needs to be done or what the theory is, may be sound, the external model is unintelligible. This is where the teacher can step in to foster a respectful learning environment by nudging the correct usage (no vocabulary drills are needed, just ask the student to restate the explanation replacing all ambiguous placeholders with appropriate vocabulary). This is also where the student can see the limitations of his/her understanding and by re-explaining with correct usage they are allowed to build a better external model of the mechanics and theory.

One note of caution: math vocabulary may have use only in mathematics. For example, ‘hypotenuse’. So if the student says ‘hippopotamus’ it’s not their fault. They only use ‘hypotenuse’ in a math context. Reinforce the correct usage without shaming.

Similarly, there is no need to require students to memorize algorithms and other mechanics before discussing theory (or vice versa). I’ve found that a constant mix of theory and mechanics helps to build sound intuition about both. For example, when introducing fraction arithmetic, I almost always ask students what they think the result of $$\frac{1}{2} + \frac{1}{3}$$ ought to be. For many students, a natural response is \(\frac{2}{5}\).

In this way, the instructor (a) models how to ask exploratory questions, (b) illustrates the difference between two mathematical objects (integers and fractions (even if they are fractional representation of integers)) and the overuse of the ‘plus’ operator, and (c) nudges the student to come up with a new theory that would keep the existing theory (addition of integers) consistent.

Then the instructor can reveal that $$\frac{1}{2} + \frac{1}{3} = \frac{5}{6}$$ and ask for a new theory of the mechanics. This can be reinforced with more purely mathematical examples or if one prefers, with tangible experiments (eg, how many one-sixth cups can a half cup and a one-third cup fill together?).

In essence, this is a pathway to math fluency. There is no need to start at the vocabulary and proceed to mechanics and then to theory. That is too monolithic of a structure.

Vocabulary, mechanics, and theory are intertwined and the student is better served by bouncing back and forth between the three. What happens is some things become familiar and hence second nature. And those things then act as a launching off point for a next layer of topics to be mastered.

Some Activities For Computational Fluency

Computational fluency doesn’t just mean speed in computation, though speed is a component. I think of computational fluency as the ability to rearrange computation with ease. Before I continue any further, let me address the notion of speed. There is a general objection in some quarters about grading students on speed (eg standardized tests or in-class, timed exams) in the sense that “we’re not measuring understanding” but instead “measuring recall”. While I don’t really care for grading, in general, I will say that speed is a measure of fluency. However, speed comes with fluency and not that “if one is quick then one is fluent”. The objection to speed-based measurement, if I understand it correctly, is that speed often ends up being the only focus to the point that education ends up being nothing more than a series of rote exercises (aka “drill and kill”).

I don’t really have objections to drills. I think they are good for helping to develop the low-level skills for future mastery. How one goes about doing this is an altogether different matter. I prefer computational drills, especially at the elementary education level, to be a mix of entertainment (games) and some straight up contextless questions.

So here are a bunch of games and activities, in no particular order, and certainly not exhaustive, and most certainly not lessons, that I find myself playing with kids or have played as a kid (and sometimes as an adult). I am purposefully omitting the usual stuff like “groceries”, “lemonade stand”, “Monopoly”, sports statistics, etc. I leave it to the instructor to decide if they want this to be speed-based, competition-based, etc. but don’t grade this! 🙂

These are simple, low- / no- tech activities that are a mix of computational drills and problem solving skills in disguise. Finally, we just have to hope that in-class activities and lessons can be translated back at home. Some of these can be games at home with the family. The bisection game can be a cool little magic trick for a kid to show off. Clearly there are many more such games and activities, but I’m nearly 2500 words.

One thought on “Becoming Mathematically Fluent”