What’s fun about numbers? You can do anything you want with them! Add ’em, subtract ’em, stick ’em in a stew. And if you do it well, you’ll get other fun numbers.

Today we’re going to explore probes. These came about from a brilliant typo by @evelynjlamb, in this tweet:

If you don't want to get RTs of primes with a lot of sixes in them for the next few months, you should probably mute me now. I just love the number 6, and so far 6-digit probes starting with 66 have been 🔥

She meant “primes” as she corrected in a subsequent tweet. But then I decided to get carried away. Why not define a probe?

I mean what is a probe? They’re those things that they launch in Star Trek: Next Generation. Picard is always launching class 1 probes in search of something or to monitor a situation. So here we are. Probes should be numbers that look for other types of numbers.

What types of numbers should we look for? Primes of course!

How should we look for them? And this is where math gets fun.

With that example, we define a probe as a number whose digit-power sum is a prime, where the power is the number of digits. Mathematically,

Who probes the probes?

We have a bunch of questions.

Does every prime number have a probe that generates it?

We can see by this example, that every prime can be generated by a weak probe and it is trivially simple to find a weak probe for any given target prime.

However, searching for a strong probe that generates 11, in this example, means that we need to search for a prime with exactly eleven 1s and an unknown number of zeros. Which number is that? Your challenge!

Now we turn our attention to strong probes only.

Does every prime number have a strong probe that generates it?

Since we are searching in the space of integers, we know that there is a minimal strong probe for a target prime \(N\). How we find this minimal strong probe is an interesting problem and I”m sure with a little bit of thought we’ll find some clever ways. As I pointed out for finding a strong probe for 11, we first start with the set of \(K\)-digit numbers and prune this down to a set of viable digits. We saw that if there is a strong probe for 11 in two digits, the largest digit could not exceed 3. For the three-digit case, the largest digit could not exceed 2. And once we reached the four digits or more, we entered into anti-Yarborough territory.

A fun exercise would be to find an algorithm that is not just a brute force, hit-or-miss search when identifying candidate solutions for strong probes.

How many strong probes are there?

On the other hand … I did a small simulation study for how strong probes are distributed in intervals of \([10^{k}, 10^{k+1})\) and I have this find. I generated random primes in a given power of ten interval and checked if that prime was a strong probe. 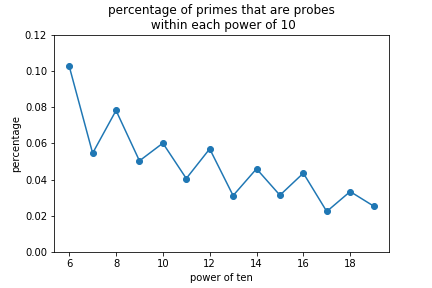 So that seems like something to definitely think about as there appears to be a decay and some oscillatory behavior between odd and even powers.

What kind of primes are generated by strong probes?

How convenient that I have a graph for exactly this question. 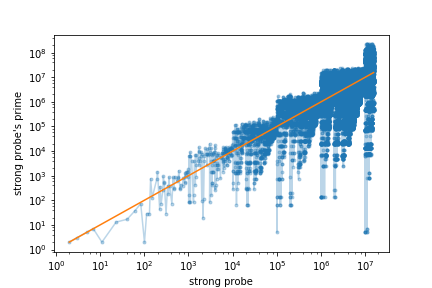 The primes generated don’t get too out of hand from the strong probe. In fact, if we look at the ratio of the prime generated to the strong probe, we have this [from the first million primes]. So it’ll be a really interesting find if we see a ratio beyond 20. 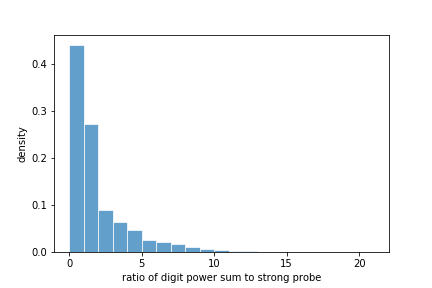 What are strong probes of order \(K\)?

Let’s put down a few theorems without proving them.

Every strong probe is at least of order 1.

Are there cyclical strong probes?

Challenge, can you find any cyclical strong probes of order \(K > 0\) with any offset?

I haven’t yet been able to find any.

This my readers is accidental math recreation. I hope you enjoyed this excursion. If you have further explorations of (strong) probes or know some deeper number theory that can answer some of the open questions here, please reach out!