In the previous post I gave a recounting of how we introduced the divider-chooser method as a simple, but effective way, to share fairly between two people.

One of the things that we wanted to do was to get away from the paper-based exercises. There is a certain amount of abstraction that doesn’t reach younger students when there is nothing physically tangible to work with. Additionally, we wanted to really get them thinking about sharing in possibly adversarial settings. The word “adversarial” is loosely technical here and not in its colloquial sense of actually pitting one person against another.

For the majority of this lesson, students had been engaged in cooperative sharing. They were interested in making sure that both sides got an equal amount. In reality, both in the kid world and the adult world, there is often an element of self-interest which supersedes an interest in making sure all parties involved get their fair share — hence, adversarial.

How can we make sure that everyone gets a fair share even if everyone wants to get more than their fair share?

We added a twist, however. So far, we had students in groups of two and we showed them how a divider-chooser type method can ensure fairness. Now, we gave them Play-Doh and put them in groups of four with the added incentive that we’ll get to have some Play-Doh time after we’re done. The objective for each group was to share Play-Doh fairly.

This problem is trickier. It’s not obvious how to extend the divider-chooser method for more than two people. If one person divides, who chooses next? How does the first person divide? In a group of four, does the divider create four pieces? Who chooses? These were the things we wanted our students to confront, explore, and understand.

Mrs. Valentine and I were each members of groups that had three students. In my group, I tried to not get involved with how they wanted to decide, but rather, I followed their lead. They had seen the rock-paper-scissors method of choosing a divider, and so, we played a four way round of rock-paper-scissors. I’m still not sure how this works, but this is what we did. All four of us, on the count of three, showed rock, paper, or scissors. I showed paper. Two of the students showed scissors and the other showed rock. As if there were some unwritten rule, the scissors get my paper and I was out. Then they went to rock and lost. And that’s how our divider was chosen. I can’t say I completely understand it, but that’s what we did! I love second grade.

So, with our divider chosen, now what? According to the group, the divider had to break up the Play-Doh into four fair shares. For a good three minutes, she tried her best to split the Play-Doh equally. Eventually she got a distribution that she thought was fair. Following the pattern from the two-person divider chooser method, she was “elected” to choose last. One of the students elected himself to choose first. Curiously, he chose the smallest piece available. Then I chose the largest piece there. The third and fourth (the divider) got pieces that looked to be roughly equal in size. Then we compared.

I asked everyone if they were happy with the piece they chose. The first person to choose said that he wasn’t happy! I asked “Why? You got to choose first, why are you not satisfied?” His response was that he was trying to be fair. Aha! He was looking to cooperate — take one for the team as it were — but when all was said and done, he had nice-person-chooser’s remorse! The other students looked at my share with envy and wished they could’ve gotten a piece as big as mine.

And now we had a lesson!

How are we going to fairly split among four of us? We tried to divide and choose but something went wrong.

Here comes The Last Diminisher method. I took the Play-Doh, bunched it all up again and took out a chunk of it and said, “This is my piece!” The other students immediately said, “That’s not fair!”. I agreed. “Now,” I said, “what we’re going to do is this.” I looked to the student to my left and asked him, “Do you want me to have this piece or do you want to claim a smaller part of this piece?” He said he wanted some of that piece. So I told him to take however, much he wants and the whatever is left over will be put back into the Play-Doh pile. The constraint was that he had to take at least some of the Play-Doh out from the share I had originally declared to be my own.

With a little prodding we repeated this with the next student. Technically, the Last Diminisher method goes around once, but we decided to go around a few times so that they could get the feel for it. Eventually, we got to a point where no one was willing to take away a piece from the piece in question. Thus, we had found our Last Diminisher. That person got the share he / she was holding on to. Now, there were three of us. Rinse and repeat and voila, we each had pieces we were happy with. When we were down to two people left, we realized we could just do a divider-chooser.

What we ended up with was this 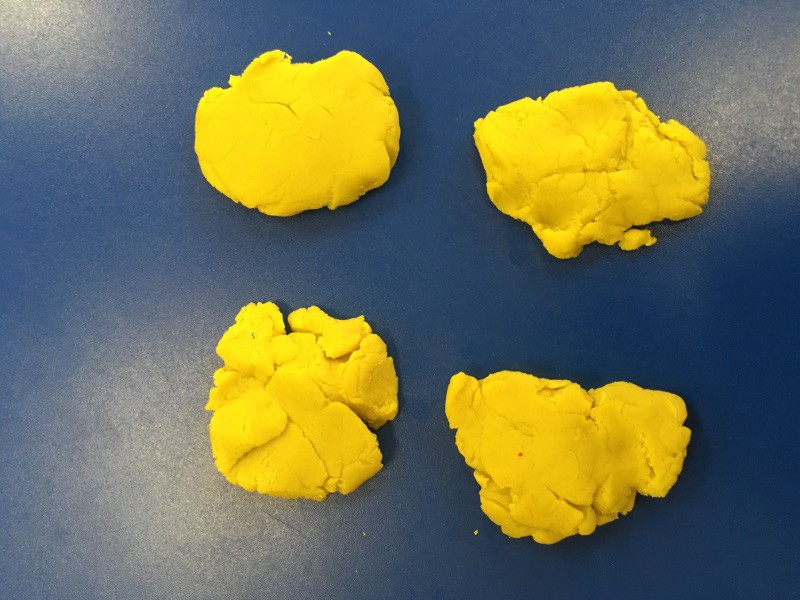 Mrs. Valentine’s group had an interesting dynamic. One student was elected the divider. She divided the pieces into four parts and then elected herself to choose first! She chose the largest piece. Mrs. Valentine let this play out and when everyone had their pieces, all but one of the students looked sad. The one student who didn’t look sad was the one who chose first, naturally. Mrs. Valentine animated this to highlight the unfairness. So they too, were taught about the Last Diminisher method and were able to eventually produce a reasonable split. 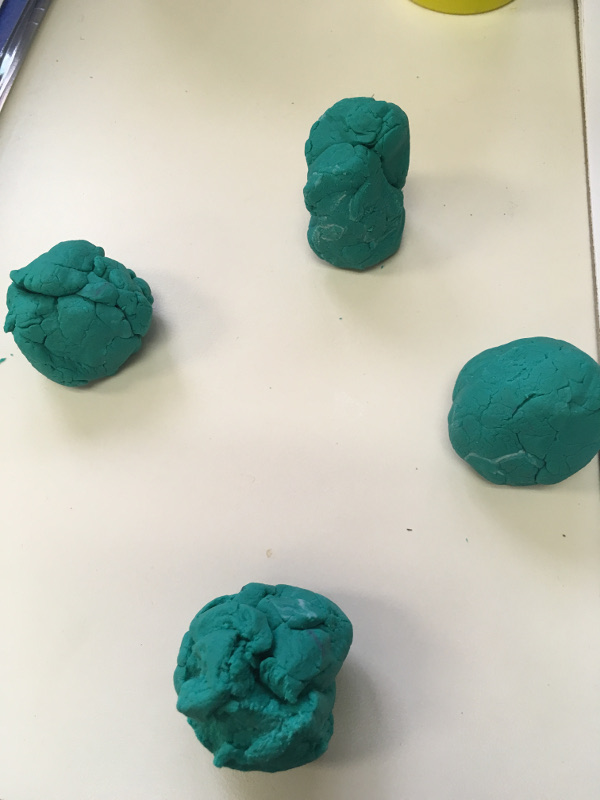 The other groups that we weren’t supervising were locked in endless debate. One group did eventually manage a split, which looked more or less fair (equal proportions, in this case). When asked how they did it, they explained that they looked at everyone’s piece and tried to balance it out.

Another group had a “fair” divider who managed to split the Play-Doh into four equal parts. They had decided that the divider would choose last and the other students would choose in some pre-determined order. This method is biased against the divider, for sure, but it really forced the divider to keep things as balanced as possible.

We wrapped up the lesson as I showed the class the Last Diminisher method and recapped Divider-Chooser.

We asked them if they could see how they would use something like this at home. One student said that she could use this for splitting Gatorade. Not bad! Another said, that they could use this to split money. Dangerous territory, but yes!

All in all, this was a general success. We got our students thinking about division without them knowing that they were doing division. We got them to think about fairness and how unfairness can be a result of a process [we didn’t phrase it like that, but I venture to guess that for some students this sits somewhere in their subconscious]. And hopefully, they learned at the least that there are ways to share fairly without having to have a third party [adult] mediate. Even if they didn’t all understand the methods we had shown for sharing, we know that they all understood that there is a method. We hope that when the time comes and they find themselves in a situation where they have to distribute resources, they’ll fall back onto this lesson and continue their exploration.