In the US and a number of other northern hemisphere, summer vacation has begun for school-goers! My summers were typically spent running around outside, riding my bike, and playing video games. I also had a small, but healthy dose of “academics” — I read and I practiced math. I remember that in my summer between fifth and sixth grade, I had forgotten how to multiply. I confessed this to my mom, and what I got was the necessary at-home attention to rebuild that skill. I’ve never looked back since.

So, from a personal standpoint, a steady interaction with subject topics which build on a strong foundation is well worth the effort in the long run. This means things like practicing drawing, continuing to practice programming, keeping up with math, doing a little writing, doing a little reading, etc.

So if you’re a teacher or parent and want to try your hand at some math that isn’t the rote arithmetic practice, follow the summer excursion series. I’ll post (hopefully) an article a week about something to talk about and discuss with your kids.

This first article in the series is a mini excursion in prime numbers. I’ll do this by posing a bunch of questions. You can take it from there. If you have questions, shoot me an email or send me a tweet @shahlock. 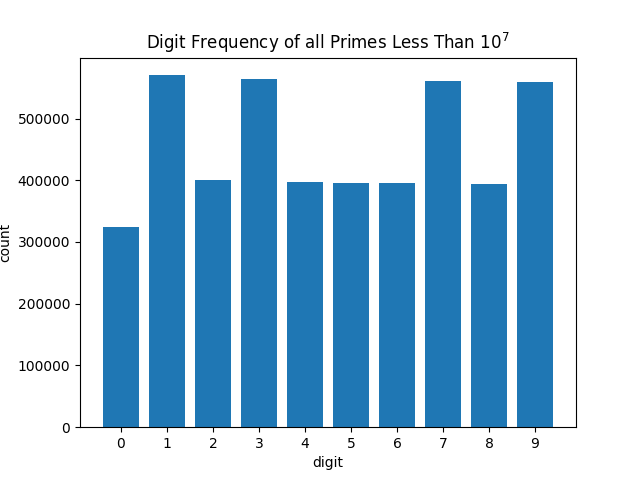 If your student / child hasn’t learned about graphs, this is a great opportunity to discuss this! Have them make a histogram of the counts of the digits for primes up to \(100\). Kill many birds with one stone — gain familiarity with prime numbers, recall of times tables [we teach students to be able to answer what \(8 \times 4\) is, for example, but we don’t emphasize factoring as much], recall of division, and intro or recall of graphing.

Now a few questions for a math excursion. Why do certain numbers show up more than others? Why do there appear to be three distinct groups of counts? What is it about prime numbers that’s giving us this graph? What should the graph look like if we constructed the sequence including all integers from 2 to 10,000,000?

The hope here is that we start thinking about prime numbers and their structure. Most of us are taught that prime numbers are positive numbers that have only \(1\) and the number itself as factors. We’re also taught that \(1\) is an exception to the rule. But students don’t really get much of an exploration beyond this.