You probably know me as the guy who invented “semi r-primes” and “emir prime” as well as “funny numbers”. In this article, we’ll talk about primal words. What are they? How do we construct them? And are there any statements we can make about their existence for an arbitrary word?

First, let’s see if you can guess what’s happening here. I asked this question on Twitter:

Read no further if you are still guessing. Otherwise, continue.

If you remove the first and last digits, the remaining digits are 5 pairs that spell LEMMA when replaced with their corresponding letter. (00=A, 01=B, 02=C, etc.)

Now, given the two examples I gave these responses are clearly correct. Here are some other examples.

We should notice that for MATH, we have that T = 71 rather than 19. Similarly, H = 59 rather than 07. The full mapping of letters to two-digit base ten codes follows this progression.

Now we are in a position to discuss primal words.

What is a primal word?

We’ll define a primal word in a broad capacity — a primal word is a sequence of letters (“word”) that can be uniquely mapped to a prime number under the following construction. First, we need a collection of letters — the American English alphabet with its usual A-Z ordering. Next, we will construct a multi-value map / encoding from letters to a triplet of two-digit encodings. \(A \rightarrow [00,26,52], B \rightarrow [01, 27, 53], \ldots, Z \rightarrow [25,51,77]\). Notice that the two-digit encodings ranging from 78-99 are excluded.

The real challenge for you is can you find a word that is not primal? So far, I’ve been unable to do so. In fact, consider the previous two sentences. Converting them into prime encodings (ignoring characters that are not the letters A through Z), we have

Every word is a primal word.

All primal words have a leading digit of 1.

As for conjecture 2, fixing the leading digit to 1 means that we have \(4 \times 3^{N}\) guesses rather than \(36 \times 3^{N}\). This factor of 9 reduction is not enough to change any of the statistical conclusions.

So now that you’ve learned what a primal word is, let’s classify them a bit more. Let’s talk about “primal words of order \(k\)”.

Suppose we have a 2-letter word. We would search for its primal-word-making prime number by starting at the smallest admissible 4-digit encoding for that word and proceed in an ordered progression until we encountered a prime number. So, we define a “primal word of order \(k\)” as one less than the number of encodings we had to search through. For example, the word “AB” is a primal word of order 3. Why? First, \(AB \rightarrow 100019\). To arrive at 100019, we had to first check 100011, then 100013, then 100017, and finally 100019. The first three encodings were not prime, the fourth one was. Thus, “AB” is a primal word of order 3.

See if you agree with the order of these words.

The word with the largest order that I’ve been able to find is QUINTUPLICATING with an order of 375! I haven’t tried made up words yet. It is an open challenge to the reader to find a word with higher order.

Here’s a density plot of primal word order on the ENABLE word list. 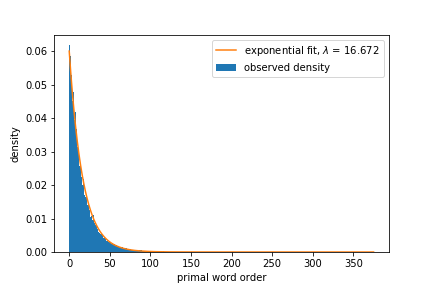 Density Plot of Order of Primal Words from ENABLE 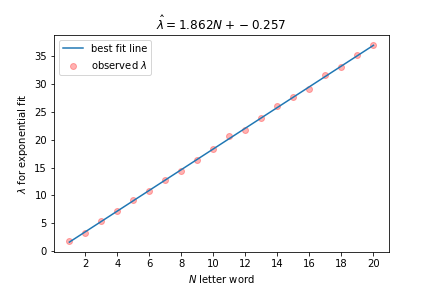 You may have noticed that on the entire ENABLE data set, the $\lambda$ parameter was approximately 16.672. This implies an \(N\) of about 9.09. The mean length of a word in ENABLE is 9.09, which is a nice corroboration of results.

And this my friends, is math recreation. 😀

If you’re interested in an interactive version, just sign up or leave a comment below, if you have already signed up. If I get at least 5 requests, I’ll make an interactive one!

In other world news

I posted this little “contest”. Check out the thread to see the awesome submissions by @AeroDaveLowe, @aap03102, @math_doc_ron, @acoustionicus, and @CardColm.

ok, in a similar manner as a previous thread, here's your #mathography challenge!

and my personal favourite…

Old dad joke the owner of a famous Segovian restauant proudly told me in 2003:

Why is Ireland the richest country in the world?

Cause its capital is always doublin'